At its October 2012 meeting, the then BPA hosted a mini-forum which involved five of the  candidates standing for election to the South Ward of the Ballarat City Council. Those who attended were Peter Innes, Matt  Mattson, Joshua Morris, Jim Rinaldi and Sundram Sivamalai.

Each of the  candidates was given the opportunity of addressing the meeting on local issues  of interest to them and then participated in a general session of questions and comments.

It was pointed out to the candidates that the BPA had enjoyed an excellent relationship with retiring Councillor Ben Taylor and the hope was expressed that a future South Ward Councillor would continue the close liaison.

Subsequently, two of the attendees Peter Innes and Joshua Morris were elected to Council along with incumbent Councillor Des Hudson as representatives of the South Ward

Some fifteen months after their planting in October 2012, the Buninyong street vines are beginning to take shape.  This project was initiated  in early 2012 by the Association with the great cooperation of the City of Ballarat.

The vines, especially those on the southern side of Learmonth St, are now well-established and are giving some idea of how the streetscape will look after a few more years.

Recent B &DCA discussions with City of Ballarat Director of Infrastructure Eric Braslis have indicated that the project might soon be extended along Warrenheip, in the short term at least to the old Eagle Hotel building 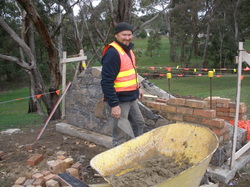 New Entrance Signage
ANOTHER BDCA PROJECT STARTS UP
Local residents entering  Buninyong from Mt Helen, recently will have seen the start of works to install four new entrance signs to Buninyong.
The entrance signs will be of stone and sawn bluestone with brushed bronze lettering, and will be highlighted by an image of Mt Buninyong. The design work for the project was carried out by local resident David Turley, of DHT Consulting. The $34,000 project will also have solar lighting installed to provide night visibility to travellers entering Buninyong.
This project has been undertaken by the Buninyong & District Community Association as part of its Program to improve the village streetscape and to enhance its tourism potential.

Grants
Earlier this year , Deputy-Premier Peter Ryan recently announced  that he had approved  a grant for $22,000 to the Buninyong & District Community Association (BDCA) for the a  project The Association had applied to Regional Development Victoria under its Putting Locals First grants scheme for assistance to replace the ageing brown wooden entrance signage. The funding
from RDV came in addition to grants of $10,000 from the City of Ballarat, and  $3000 from the Buninyong Community Bank. Member for Western Victoria Simon  Ramsay said that he was glad to support the BDCA application because it was “another example of the very active local group working to enhance the village image, encourage more visitors, to and boost business in
Buninyong”.
The project team consists of BDCA Executive members Barry Fitzgerald and Ian Salathiel, and local landscape designer/architect David Turley. The City of Ballarat was represented by its Coordinator of City Image, architect Tim Grace. Barry Fitzgerald said that while working on roadside reserves carried with it many regulations and requirements, the project had been given every assistance from VicRoads and from the City of Ballarat.
It is expected that the project will be completed by the end of October 2013 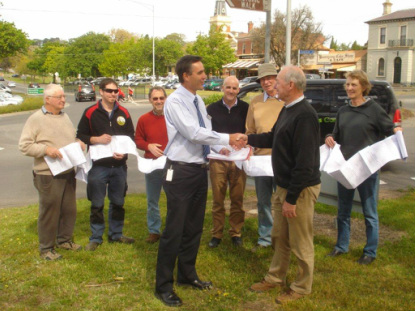 VicRoads Regional Manager, Ewen Nevett, accepting the petition from BPA President
One of the BDCA’s active sub-Committees – the Road Traffic and Safety Committee, was responsible for a petition about road safety which was  signed by almost 600 residents during the June-August period of this
year.

The petition requested VicRoads to act on two traffic issues – a
call for the speed limit in the village to be reduced by 10 kph, and the
installation of flashing lights at the School Crossing on the Midland Highway at Cornish Street.

Co-ordinated by the Committee’s Convenor, Lyn Lea, the petition was handed to VicRoad’s Regional Manager Ewen Nevett, by BPA President Ian Salathiel and a group of members at the roundabout corner on 23 October 2012.

The petition was sparked, in part, by a near-miss accident involving a B- Double truck which skidded for about 150 m before crashing through the roundabout on 9 March 2012.

Following  lobbying by the Association, VicRoads and the Ballarat City Council agreed to fund a traffic impact study relating to traffic movement and safety issues in
Buninyong.

This study was carried out in the October-November 2012 period
and the consultant is expected to complete a Report in the very near
future. The draft report is currently being considered by Council and VicRoads.

Residents would have observed the traffic tapes laid across several key roads in central Buninyong in late October, and the presence of
orange-jacketed employees posted at the Learmonth Street/Warrenheip Street intersection also noting traffic flows.

The Association has been expressing concern at the future impact
of the diversion of Ballarat traffic from western areas of the city via the
so-called Western Link Road which is planned to feed onto the Midland Highway at  Magpie.

While possible by-pass routes are not being considered in the
present study, VicRoads is well aware of the need to consider this issue in its future traffic planning. 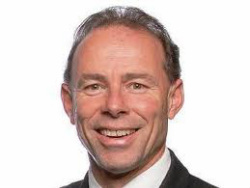 In an adjournment speech to the Victorian Parliament made on 12 December 2012, the
State member for Ballarat South, Geoff
Howard, raised the matter of traffic flow through Buninyong and pointed also
to the need for flashing lights at the Children’s Crossing on the Buninyong hill.

In his speech Mr Howard noted that “the Buninyong Progress Association has been active in raising these issues also, and are keenly awaiting a traffic safety report to the town which the Regional manager of VicRoads has committed to producing.”

Mr Howard invited the Minister for transport Terry Mulder to visit Buninyong to meet with local residents on traffic
issues.

The full text of the speech made by Mr Howard on local traffic issues can be acccessed on his website.